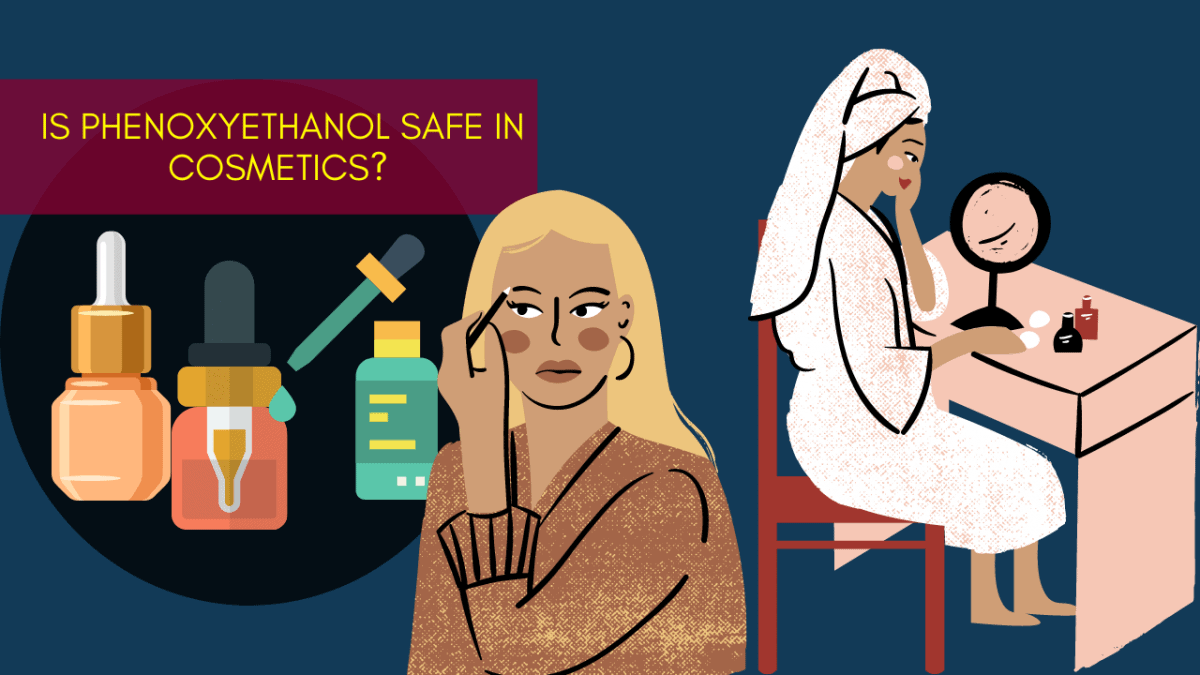 Yes! Phenoxyethanol in cosmetics is safe for moderated use and the relatively low levels each product is required to pass the FDA approval safety net as safe enough for all consumers to use indicates that Phenoxyethanol is safe in most drugstore skincare cosmetics.

However, your level of toxicity that may lead to Phenoxyethanol being harmful enough to cause severe eye irritation and redness, numbness, and dryness of the skin increases when two or more of your products in your skincare routine has Phenoxyethanol compound. 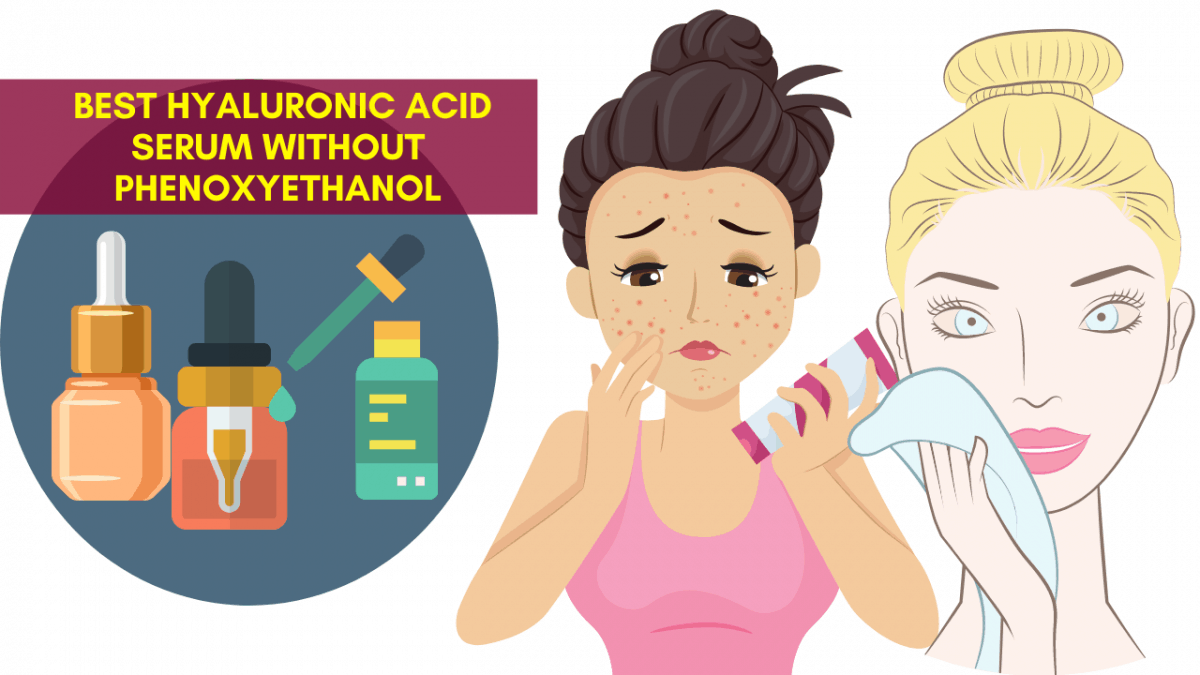 In the 21st century, most people have skincare routines that they follow in order to maintain a flawless natural look.

Most of these routines come with factory manufactured cosmetics that may be organic or non-organic.

Either way most of these products such as cleansers, moisturizers, serums and creams incorporate phenoxyethanol to preserve the cosmetic as a way of extending its shelf life.

Others also use it as a stabilizer in perfumes and soaps. Although it has 1% approval to be used in cosmetics globally, the synthetic solvent that is extracted from green tea has shown that it can potentially harm the body.

Research and results have proved that phenoxyethanol has adverse short- and long-term effects on the skin, eyes and brain. We will go in detail to see if phenoxyethanol in cosmetics is harmful or not. Let’s get into it.

It is an oily rose fragranced preservative without color that is found in green tea but is synthesized in a laboratory replaced paraben after the product was criticized and thrown under the bus for being chemically dangerous resulting negative effects on skin and health.

Most manufacturers like it and use it in enhancing effectiveness of the product through quality and safety.

However, since its inception there have been debates back and forth about its safety due to reports on adverse effects that it causes dating to 2008 despite the fact that the reports are rare.

The biggest problem is that neither is natural nor safe as it is made from phenol a noxious powder from benzene that is attributed to sparking cancer in human beings.

The synthesizing process treats the original extract with ethylene oxide and coal tar which are both carcinogens. It might be nature identical because it appears in green tea but chemicals are used in the synthesis process.

Due to this fact brands and retailers are cutting down or simply stopping the use of the ingredient to protect the interests of their brand, maintain integrity but most importantly protect their customers.

International journey of toxicology claims phenoxyethanol use in cosmetics is nontoxic and safe as it is used in low percentages. However, Material data safety sheet disagrees with the claim and clearly emphasizes that phenoxyethanol causes skin and lung irritation.

It is a toxic chemical and with repeated exposure it leads to organ damage in liver, kidney and nervous system.

Scientific evidence points out that high doses of undiluted phenoxyethanol are without a doubt toxic.

Evidence provided by the Federal Drug Administration FDA on a brand of nipple cream known as “Mommy’s bliss nipple cream” by MOM enterprise in 2008 showed that the cream which contained phenoxyethanol had negative effects on the infants. This proved just how unsafe it is in cosmetics.

European Union and Japan have since banned phenoxyethanol with fear and concerns that manufacturers may add additional toxins due to lack of proper regulations bringing in more controversy on just how unsafe phenoxyethanol as an ingredient is in cosmetics.

The chemical can harm the body through oral intake, inhaling air that contains the ingredient as well as absorbing it through skin which occurs mostly through use of cosmetics.

First things first, phenoxyethanol has been listed among top 8 chemicals that ought to be avoided in skin care.it is used as a preservative, solvent and antimicrobial ingredient.

Just like parabens, sulfates, phthalates, fragrance, formaldehyde, alcohols and peg, phenoxyethanol has received negative attention because of the effects that it has on our skin and overall health.

The small amounts that are used in organic products when used on a regular basis also stand to accumulate resulting in negative effects overtime.

It should be noted that effects will vary from one person to another depending on factors such as existing skin conditions as well as skin type.

These effects may include :

These arise due to the fact that the chemical induces cell death at low concentration. This is the concentration that is used in most cosmetics deeming that phenoxyethanol is not safe in cosmetics.

Since most manufacturers are aware of the negative attention that has befallen phenoxyethanol, they use unsimilar names that will confuse the consumer and will be difficult to identify such as rose ether and fragrance.

Most likely an unlabeled fragrance could be phenoxyethanol. They use the “confuse the enemy” strategy on customers that tend to pay attention to list of ingredients on packaging.

On the brighter side, other names appear very similar to the original name. These include hydroxyethyl phenyl ether,2phenoxy ethanol, glycol ether, Ethylene glycol monophenyl, PhE, Dowan, Arosol, Phenoxol, Arosol, Phenoxetal, Phenoxyethyl alcohol, Beta+ hydroxyethyl phenyl ether and Euxy K 400 which is simply a mixture of Phenoxyethanol and 1,2, dibromo02 and 4 dicyabutane.

These names will give you an upper hand to be able to spot a product that contains phenoxyethanol.

To avoid running into what you are running away from, you have to be well versed in information about alternative names used by manufacturers.

After identifying the phenoxyethanol product, you might be thinking of finding a product that will replace or be an alternative. Here are some pointers to what you could grab.

Has been adopted by many companies and can be used as a sole preservative fighting against bacteria.

An antibacterial that recently made way into the market but had been previously functioning as a fragrance. It has essential oils and an acid with anti-microbial activity.

With natural defense mechanisms, they have antimicrobial activity capability that can be extracted from plant such as cinnamic acid and thyme which have both anti- fungal and anti-bacterial properties.

Water soluble form makes acids capable of incorporating anti-microbial ingredients such as associated salts that can be useful in preservation of cosmetic formulations.

Relies on five ingredients including oxygen and glucose to formulate microbial control that has wide antibacterial properties and improve antifungal efficacy. Iodine ions, glucose and thiocyanate are added to the cosmetic formulation.

Protein like compounds that are found in plants and animals to act as a defense for microbial activity by gaining competitive advantage over microorganisms.

Through a process of fermentation, they provide effective broad=spectrum antimicrobial ingredients that can be used in cosmetic formulations. They have since been recognized as safe by the Federation Drug Administration.

In a market full of competition, you are privileged that if one product is not suitable for you, there are a million other choices available for you that are not only safe but are quality guaranteed and tailormade to cater for your needs.

When all is said and done, you should keep in mind that the manufacturer is determined to keep their product safe from deteriorating.

You should be concerned with keeping your skin and health from deteriorating by choosing the right product that contains the right ingredients.

Although more companies have been advertising their products s paraben free and natural, the opposite is true as they are using phenoxyethanol which is harmful as an alternative.

It is a tropical irritant that requires precautionary measures to be taken before use. Therefore, it is always imperative to make informed choices about what goes in your choice of product.

Despite keeping the product safe, chemicals like phenoxyethanol may cause harm to skin and health.

This is why it is important to closely read labels, find products with the right kind of ingredients of your skin putting into consideration your skin type and sensitivity which varies from person to person. It’s always better to be safe than sorry.

Reresearch that has been conducted has shown that there are indeed damaging effects associated with the use of phenoxyethanol.

Moving forward more research must be conducted on long term effects of phenoxyethanol in the human body. While we wait for that you need to put your safety first by doing what has been discussed in the paragraph above.

Find alternatives, use home remedies and recommendations from accredited dermatologists. Prevention is better than cure they say, you should rather avoid products with phenoxyethanol for the time being.

We are free to make choices however we are not free from the consequences that come with the choices we make. It is important to choose wisely.

If you have a dry scalp you know how frustrating it can be to find a shampoo and conditioner that actually work. There are a lot of products on the market that claim to be the best for the dry scalp...

Dry scalp is a common issue, especially in the wintertime. If you're looking for a shampoo and conditioner set to help battle dryness and itchiness, Avlon Keracare for Dry Itchy Scalp may be a good...

Hey, Amelia here! Angie and I started Intu Skincare to share skincare experiences with our growing fans who rely on the expertly researched skincare guides that we publish here at Intu Skincare.

This site is a participant in the Amazon Services LLC Associates Program, an affiliate advertising program designed to provide a means for sites to earn advertising fees by advertising and linking to Amazon.com. We are compensated for referring traffic and business to Amazon and other companies linked to on this site.